I’m still a huge fan of The Walking Dead, even though every season the show takes an emotional toll on me. It’s such an emotional drain that I have never re-watched an entire season of this show. I’ve occasionally re-watched an episode or two, but most of the series, I avoid.

Now let’s get something out of the way first. As much as the show is emotionally fatiguing, it’s also incredibly gratifying. I’m going to continue to watch it despite what happened in the last episode, but I fully, and completely, understand those of you who want to check the fuck out. I get it. I’m not Asian. I’m not a guy. But I sympathize and empathize with all of you who had a deep emotional investment in Glen.

I’ll never know what it was like for you to lose him, but I’m a black woman who rarely gets to see herself in the media she consumes, and I do know what it’s like to lose a character you love, cared about, and rooted for (Sleepy Hollow, I’m lookin’ atchu!). I’m not going to stop watching The Walking Dead because there are other characters i still love, and  I’m stannin’ for  Michonne, Carol, Morgan and Daryl. Those, for me, are good reasons  to keep watching.

However, if you feel you can’t watch this show anymore, I want you to know, your reasons for boycotting are entirely valid. Don’t let the rest of the fandom gaslight you into thinking what happened doesn’t mean anything. Glenn was the ONLY Asian representation for six seasons, and that meant something to you. If you started watching this at thirteen, that means you’re a grown man now. You grew up with Glenn. You watched him become a man just as you were becoming one, too. Your feelings, no matter what they are, are completely valid, you don’t have to justify how you feel, and you do whatever you have to do to self-care. If that means getting away from this show, than that’s what you must do, and no one has the right to denigrate you for doing that.

That said, I still had something of a debate with myself on whether I should watch this episode, although I knew I couldn’t stay away from the show forever. I get addicted to shows sometimes and TWD is one of those shows. I dithered right up until, and after it aired. (So I cheated and watched The Talking Dead, the talk show discussing whatever episode just aired. ) I’m glad I didn’t skip this though because I’ve been waiting a long time to see King Ezekiel and Shiva. In the comic books he sounded so ridiculous that I just kind of dismissed him, but he is kinda awesomely funny on this show. And hey, I love tigers! I’m glad they didn’t wait until mid- season to introduce either of these two. 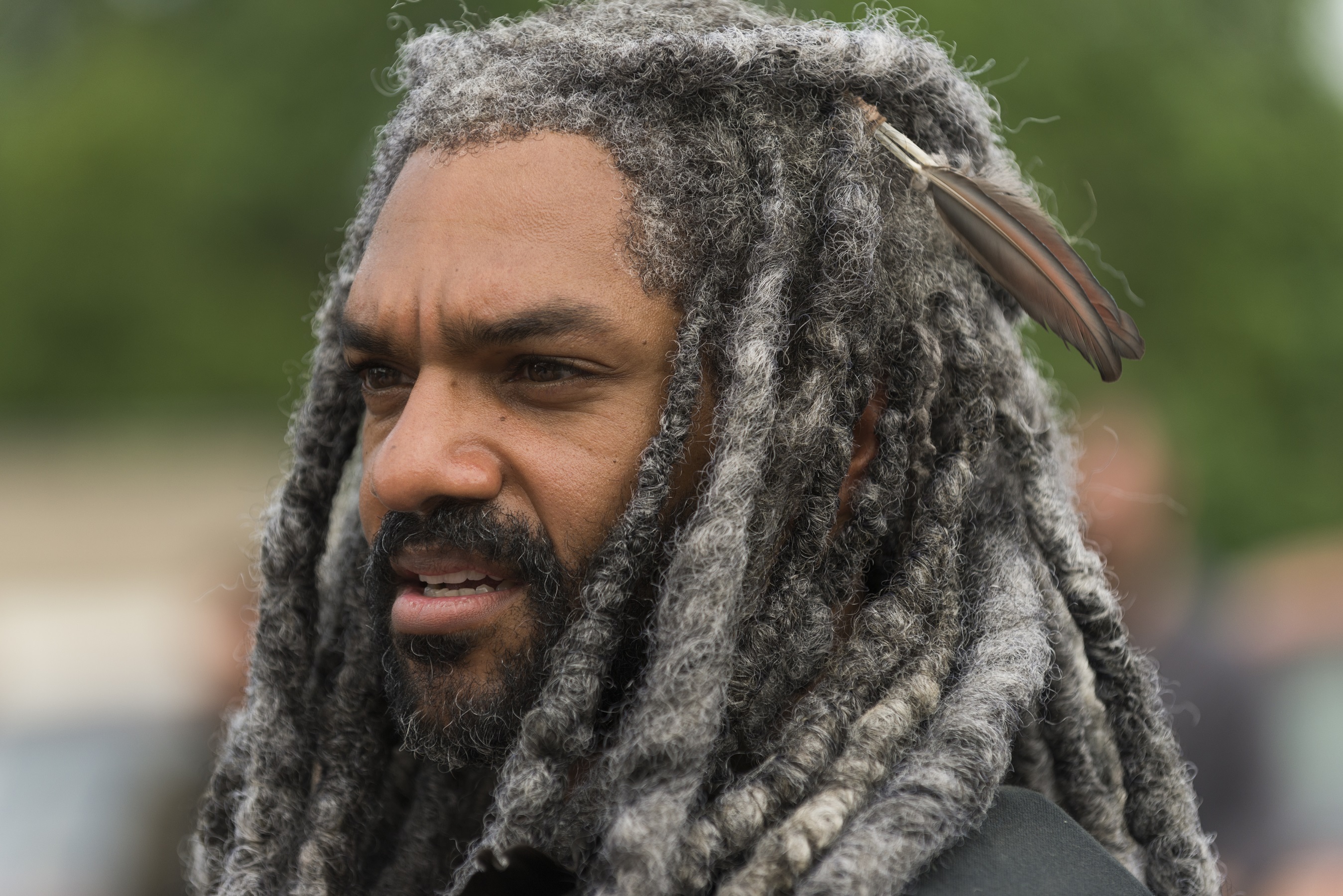 We spend out time this episode finding out what happened to Morgan and Carol. When we last saw them they were being attacked by Walkers after one of Negan’s people tried to kill Carol. Morgan, for the first time since we saw him in season one, shot a man to save her. Ezekiel’s people come riding in on horses, and carrying lances, and swords, to take out the Walkers surrounding them.

While Carol recuperates, Morgan gets a quick tour of Ezekiel’s Kingdom, where the motto is that as one takes from The Well, one gives back to The Well, which means that if you take their hospitality than you must pay it back by being useful to the group. This is not a different philosophy from that which was practiced by the cops in Atlanta, who captured and enslaved Noah, but seems much less coercive when practiced in The Kingdom. Probably because people are free to leave anytime they want. I’d like to know why Carol only ever seems to encounter these new communities  after being injured. She keeps waking up to new faces.

Ezekiel is over the top and dramatic but seems to run his Kingdom very well, although its a like visiting a RenFaire. His people seem happy and productive. They have movie nights, a choir, breakfast and lunch cobbler, and a theater. Meeting Ezekiel the way we did was a lot of fun and a reprieve from the grief of last week. Shiva was awesome, but the stand out character seemed to be Jerry, Ezekiel’s majordomo, a giant Hispanic man, who reminds me heavily of Eugene, and has quickly become a fan favorite. Also I think the idea of having cobbler at every meal is hilarious. Well, what else are going to do with all that damn fruit? But there are some dark undertones in this scenario.

Ezekiel asks Morgan to accompany him on a run,where wild pigs are captured and fed Walkers, so that their stomachs are full of rotten meat, and then they’re given to the Saviors as part of their tithe. Morgan finds himself in the ironic position of defending another man with a gun, but he drops his weapon instead. Zeke tells Morgan he was curious about what Morgan would do,and that the pigs, and his tithes to Negan, are a secret he keeps from his people.

Impressed by Morgan’s skills with the bo staff, he asks Morgan to teach aikido to one of his young charges, who happens to be inept with knives and arrows, and Morgan goes along with this. He seems to be thinking hard about staying in the Kingdom.

Carol meets Zeke and Shiva for the first time and plays her innocent act, which Ezekiel sees right through, probably because he’s playing a role as well, and so recognizes the same thing when she does it. I thought she was laying on the “oh mys” and “my goshes” a little thick. My favorite moment is when Zeke calls her “fair lady”. Carol thinks he and his people are living in a fairy tale, and finds its all laughably ridiculous. She spends most of the episode pretending to be sweet and innocent, while stealing supplies for her eventual walkout. 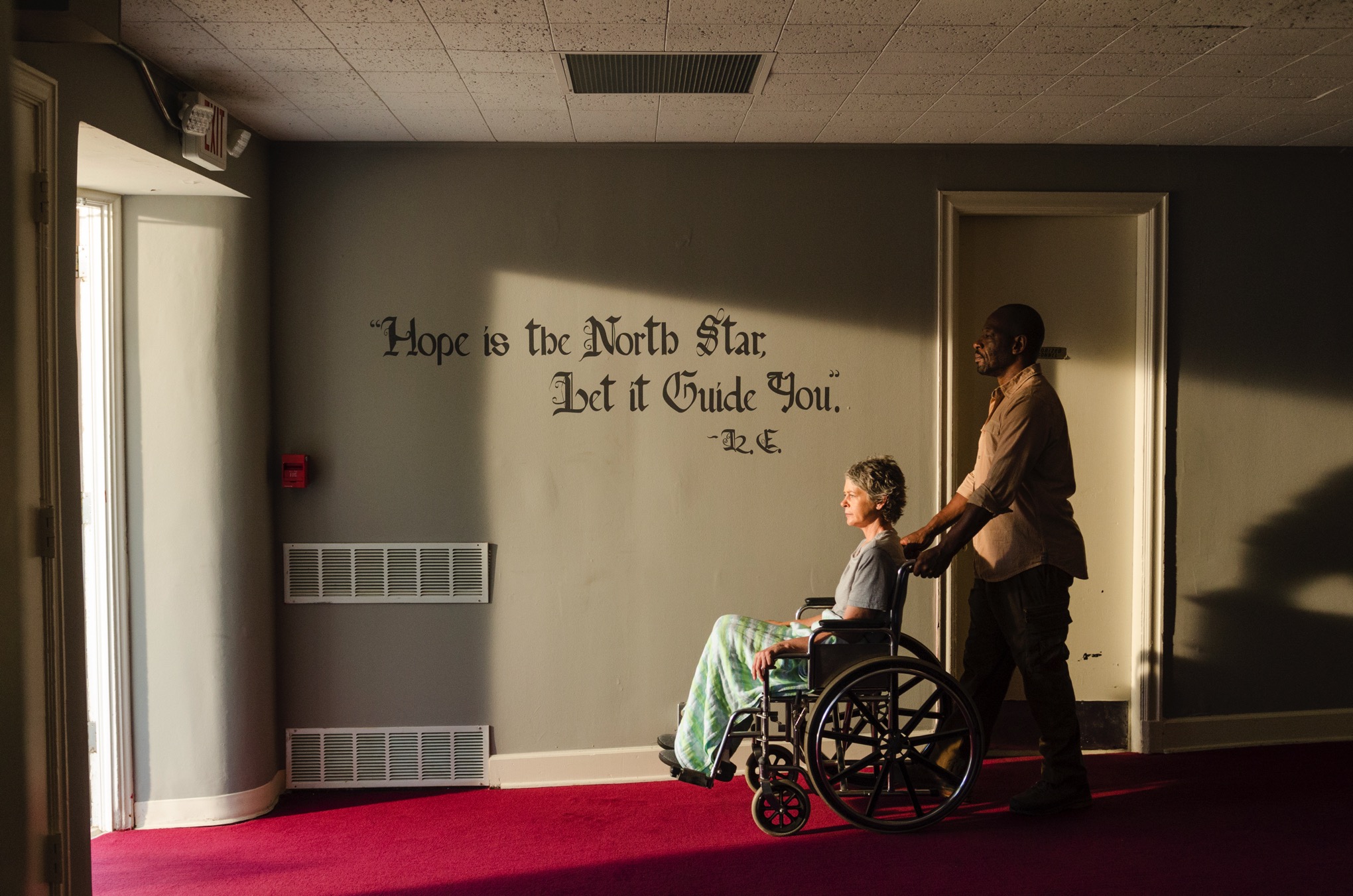 But Ezekiel is very observant. He catches her stealing fruit from one of his trees, and confronts her about her act. He asks her to stay, and tells her his backstory, of how people treated him when they saw him with Shiva, and tells her there is a purpose to his act. That it keeps his people sane, and gives them hope. I got some strong romantic vibes from these two. Its obvious that Ezekiel really seems to like her, so I think he does have ulterior motives in asking her to “go but not go”. Which is Zeke speak for “you ain’t gotta stay, but I’d sure hate for you to leave”.

King Ezekiel helps Carol gather supplies, but later he comes to visit her at one of the abandoned homes, where she’s chosen to stay in her self-exile, and brings her the pomegranate  he offered her, when they first met. This is  definitely the beginning of a courtship. I think Zeke is smitten with Carol, and she is  charmed and amused at his antic. His frank conversation with her before she left went a long way towards getting her to like him, I think. It certainly worked on me.

I also want to point out that, as the seasons have progressed, the Walkers have become even more disgusting. Have you noticed? The Walkers are rotting, and not a lot of new ones are really being created, as people have gotten very good at adapting to, and navigating, this environment.

Oh yeah, that song the choir was singing, during Carol’s tour of he Kingdom, is a Bob Dylan Song called Don’t Think Twice, Its Alright. I love the barbershop quartet version, and now its stuck in my head, (along with the opening piano theme of Westworld.)

One thought on “The Walking Dead Season 7: The Well”