Shadow’s savior from the last episode is nowhere to be found, and Wednesday  was holed up in a hotel, putting his thing down. Shadow gets himself patched up, (note the wound in his side), and he confronts Wednesday about what happened to him, and although Wednesday tells him he is angry about it, he is otherwise non-committal. The funeral over, Shadow still alive, they continue their road trip. Next stop: Chicago.

The first god we see is Ibis, in every episode, also known as Thoth. In Egyptian mythology he was the scribe of the gods. In most traditional depictions he has the head of an ibis bird, with a long curved beak. This Ibis has a human head and round, rimless glasses. When the show opens, he’s writing a history of Odin, the All-Father of Norse mythology, god of war, wisdom, and poetry, among a host of  other things. In the second episode he’s writing how Anansi came to America, on what else? A slave ship!

You may remember Demore Barnes as one of the serial killers, in the series, Hannibal. We’ll get to see more of Ibis, later in the series,  when Shadow finally meets him.

According to legend, Odin sacrificed his left eye in exchange for a drink from the Well of Wisdom (which we may be encountering in a later episode.) And yes, Mr. Wednesday has a glass eye. Odin is also a god of war, so that’s part of the reason he’s traveling around, trying to get all these other gods to commit to a war with the noobs.

When we meet Odin, he looks like he’s  fallen on hard times, but he’s a con man, and we’ll get to see more of this in the third episode, in one of the book’s best scenes, the Bank Heist. We already saw him con his way into a first class ticket on the plane where he met Shadow. According to Mr. Wednesday conning people is: “… all about getting people to believe in you. It’s not the cash, it’s the faith.” Bilquis does something like this too, so pay close attention to the various ways the old gods get people to believe in them vs how the new gods get people’s belief. As far as I can tell the new gods of media and technology seem to rely on hype-men, while the old ones have to do it all by themselves.

Pay attention to the use of transition scenes. They’re usually done by pointing the camera skyward, before moving to the next destination in the narrative. In particular, pay close attention to weather phenomena as it relates to Shadow’s presence, or when transitioning from a scene in which he was just speaking.

In this episode, we learn that Wednesday hates telephones and highways. I get why he’d hate telephones, as that’s a direct connection to Technical Boy, and he can’t have that. I do wonder about the real reason he won’t use highways. Is there a highway god? It makes sense that in America there would be car gods and highway gods.

Since Wednesday can’t call to make his plans, he has to meet everyone face to face. He sends Shadow off to buy gifts  for Czernobog and Zorya Sisters, and while he’sshopping, Shadow meets Media, played by Gillian Anderson.

Bilquis, the woman in red, is what’s left of the Queen of Sheba, not technically a goddess, but worshiped for her beauty and power. In this episode, we witness a montage of her consumption of  various men and women. The way its shown, she appears to be ravenous. We don’t know how long her vigor lasts after she eats, but we’re given the idea that these events happen over the course of several hours or days.

We also get to see what’s inside her magical va-jay-jay. I won’t tell you what, but it is pretty awesome, and you understand why her partners are so ecstatic about  what’s happening to them. I thought this was hilarious but I have weird humor. This show is Bryan Fuller completely unleashed. There is full frontal in this episode, along with  dick pics. If you have delicate  sensibilities, you may want toskip this series.

Later, we see Bilquis visiting the  display at a museum, of a fertility statue, supposedly of her, and she has  enough power to rearrange a display of gemstones, thought to be representative of her, with her telekinetic powers, (this isn’t something from the book), and I wonder if that was what all her extra feeding was about, just so she could have the power to do that. At any rate, we get a glimpse of how powerful she is, in that scene. Once you start looking for them,  most of the people Shadow encounters are actually ancient gods. His friend in prison, played by Jonathan Tucker, goes by the name Low Key Lyesmith. We saw him in the first episode when Shadow was in prison. I said initially that Mr. World was Loki, and he is. Low Key is just who he was, when he was  in prison with Shadow.

In prison, Lyesmith is preoccupied by the lack of hangings in America, “no gallows dirt, no gallows deals.” This doesn’t make much sense to Shadow, but it makes more sense if you consider that  he’s Odin’s blood brother. Odin is the gallows god, too. He  sacrificed himself by swinging from a noose tied to a branch of Yggdrasil, the great World Tree of Norse legend, which sneaks into Shadow’s dreams, and is represented by the tree on which Shadow was lynched, at the end of episode one. In exchange for nine days and nights in the noose, Odin received some of the greatest secrets of existence. Shadow hung on the tree briefly, but is about to be privy to a great revelation; the existence of gods.

Jonathan Tucker is also an alumnus of Hannibal. He played another serial killer,who tried to hang Hannibal, and was shot by Jack Crawford. 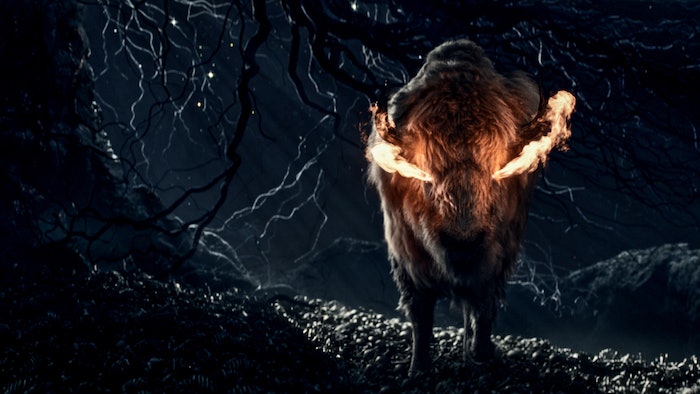 In addition to the great tree, Shadow keeps having visions of a talking Buffalo, with flames spurting out of his eyes.  The Buffalo isn’t a god. He’s the land, (or so he tells Shadow toward the end of the book). But he’s god enough to need the same thing all the rest of them need: Faith. He has one piece of advice for the dreaming Shadow: Believe.

I initially thought this vision was one of the Plains Indians Buffalo legends.

In one of the greatest introductions of any character in a Bryan Fuller Joint, we get to see another Coming to America story. Anansi is a trickster god who originated with the Ashanti people, from what is now Ghana. He’s often depicted as a spider; here, in 1697, crossing the Atlantic in the belly of a slave ship, he’s dressed in a loud plaid suit and depicted as a messenger from the future. He’s the god of all stories, and he’s got an important tale to tell this group of men: “Once upon a time, a man got fucked,” he begins.“That’s the story of black people in America.” He then launches into a rousing speech , and I totally smell an Emmy nom in Orlando Jones’ future.

*Every once in a while, a monologue comes along that seems destined to be recited by theater students and auditioning actors until the sun burns out. Tonight, Starz’s Neil Gaiman adaptation American Gods granted the world such a monologue and put it in the mouth of Orlando Jones. As Mr. Nancy, the well-dressed, anthropomorphization of African trickster spider-god Anansi, he delivers a blistering soliloquy to a ship full of slaves on their way to colonial America and it seems writ by fire, torching the lies we tell ourselves about the ways black people are treated in the U.S. END_OF_DOCUMENT_TOKEN_TO_BE_REPLACED