Last week was the 50th San Diego Comic Con, and we got  some exciting news and trailers from it. Well, exciting for me, at any rate.

Let’s start with the trailers for forthcoming movies and shows:

I am not a Top Gun fan, because I’m just not into military films, as a rule, but I know some of you guys are really into this stuff, so here’s the new trailer  for it. Its funny but I’ve seen all of Tom Cruise’s movies, but would not call myself a fan of his. He just just keeps starring in things that interest me, like spy movies. Perhaps the word I would prefer to use is “tolerate”.

I just watched these movies back to back a few weekends ago, and they’re still pretty effective.  The original films were an odd mix of horror and humor, and I hope this new show can hold up to the same standards.

After the success of Star trek Discovery, I am cautiously excited about this show. I really like Jean Luc Picard as a character, and I really like the idea of him having more adventures after his retirement, and it looks gorgeous. Buuuuut…. I’m still not as enthusiastic about it, as I think I should be, and I wonder if I have Star Trek fatigue. Nevertheless, I’m gonna check this out.

Not sure how I feel about this show. I’m not a gamer, and only know about this show, and this world, from reading books about the artwork. I keep having to suppress laughter at Henry Caville’s wig, which is very distracting, and  I don’t know why. On the other hand, this trailer looks fucking awesome!

This is another trailer that looks really  interesting, but I’m not a huge fan of the movie, beyond thinking it looked pretty, nor am I a fan of the philosophies espoused in it, and I’m not sure I want to watch an entire season of something this intense. I can think of a whole bunch of reasons not to watch this, in fact, but I probably will watch it, because I love Regina King , and I’ve never seen her is this type of role before. We keep asking for these types of roles with Black women, and then don’t support them, so I’m definitely gonna be there, but I’m afraid  I may not actually enjoy it.

I missed the last season  of this show, but I can see by the trailer, that its as zany as it ever was.

I may have to subscribe to CBS All Access again because they are making more of these little one offs, that look really good. I enjoyed the last three or four they made, which occurred between the season’s for Discovery, and were basically back stories for some of the characters we met last season, or some established characters, and one of them presented an interesting mystery for the future, that had bearing on the end of the last season! So I am looking forward to what I’m going to see here. It looks like fun, and I really did enjoy this version of  Spock, btw.

I’m really excited about this show, but only because I saw the a couple of The Legends of Tomorrow episodes which featured this actress. Yes, the dialogue is atrocious, but then the same thing was said about Titans, and I liked it okay. This trailer has been horribly panned by well…the usual suspects really, but I’m past caring whether or not they think something is bad or good, based on whether or not there’s women in it.

I gotta say, that while the MCU may be tearing it up on the big screen, the DCEU is killing it on the small one, ,as far as diversity, and inclusion, with plenty of characters of color (that they don’t always get right, but at least they’re trying, which is more than I can say for the MCU), but also plenty of openly gay and lesbian characters, (of which the MCU has but none), who are not all White people. The DCEU really does need to  work on the  dialogue though.

I watched the original move, and while I got the message behind it, it was still so incredibly depressing that it didn’t even make my favorites list for the year of its release. The trailer looks fascinating, but I don’t know if I want to visit this horrible little world on a regular basis. W’ell see how I feel bout it after its air date.

And the big news is the upcoming slate of movies and shows from phase 4 of The MCU, including Black Panther 2, Captain Marvel 2, The Eternals, Guardians of the Galaxy 3, and Blade, and The X-Men!

Now, its been said that the new Blade movie is a reboot, and will star Maharsala Ali who has been wanting to play Blade for a while, and people are very excited abut this, (including me).

Its also been stated that Blade, like Deadpool, and Venom, which are not actually a part of the MCU in the same way as Doctor Strange, and Spiderman, will be a standalone franchise, like the other two, or maybe part of phase 5, or a TV show, or well…its not exactly clear. On the other hand, Blade may actually be part of the MCU, and there might possibly be a crossover with Dr. Strange, as in the comic books, there is a crossover between Strange, Morbius, and Blade. There will definitely be a Morbius movie though, so I’m hopeful that is the plan for these movies.

I love, love, love, the Blade movies, and have watched all the other versions, but remain unimpressed by those. A lot of people forget that there was a  live action television show, and a cartoon, as well, and Wesley Snipes recently did a brief cameo on the hit TV series, What We Do In The Shadows.

Mahershala Ali is the only Muslim actor to receive an Oscar, for his role as the drug dealing Juan in the movie Moonlight, so I am really looking forward to seeing him in this new version. If you want to see what he’d be most like as Blade, then check out his character in Battle Angel Alita, which looks like he’s auditioning for the role.

More news from the CON is that Natalie Portman will be starring in the new Thor movie, which will be directed by Taika Waititi, and its rumored that she will play the new Thor, like the character from the comics. Creators have clearly stated that Tessa Thompson’s Valkyrie is the only openly gay character in the MCU, and its possible (at least we hope it is, since Waititi is both the writer and Director) that we will see her get a Queen in the new movie. (This is after Thor has handed over his Kingship to her at the end of Endgame.)

Ava Duvernay is making The Eternals, which will racebend the  white, male, character of Makkari,  to  a deaf Black woman. Lauren Ridloff you may remember from her stint on last season’s The Walking Dead. I’m good with this becasue I just really like this actress. 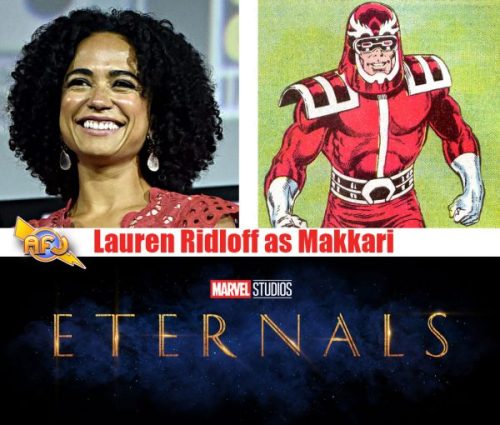 There’s also news about the MCU: Shang Chi, about a brilliant martial artist, which has found its lead character actor, and his villainous opponent, The Mandarin, who will be played by Tony Leung, who has starred in Hero and The Grandmaster:

And for the rest:

Also, one more movie I’m really excited about, because I just love this idea of time traveling to save loved ones, and its an opportunity to showcase, yet another, little Black girl in a Thriller, is this little gem, called Don’t Let Go! I thought at first it was going to be a ghost movie, but it turns out to be a little more in depth than that, and I’m here for it..

One thought on “News After San Diego”