From War of the Worlds To  Us

2008 saw the release of the movie The Strangers, one of a long line of home invasion movies throughout Hollywood history. A couple goes on  vacation and gets terrorized by three strangers, who  invade their home.

There have always been home invasion movies, but its a trope that became especially  popular after the Manson-Tate Murders in 1969, when followers of cult leader, Charles Manson, broke into the home of Sharon Tate and Roman Polanski, killing Tate, and her unborn child, and leaving the graffiti, Helter Skelter, which was a reference to Manson’s plan that the murders would cause a race war that Black people would win.

Manson believed the tensions between blacks and whites in the counter-cultural boiling pot of the 1960s would erupt into a cataclysmic race war that would end in the slaughter of nearly all white people. He called this doomsday scenario “Helter Skelter.”

In 1938, Orson Welles adapted a radio play called War of the Worlds, a story about the invasion of England by Martians, who want to wipe out humanity, and take their place. The original story was written as a response to British Imperialism, and Victorian superstition. This is not the first alien invasion story, but it was certainly the most influential, because many of the alien invasion tropes we see in movies today, are heavily influenced by it ,and what has been obscured in most of these remakes and reimaginings is the author’s motivation in writing the initial text.

Wells said that the plot arose from a discussion with his brother Frank about the catastrophic impact of the British on indigenous Tasmanians. What would happen, he wondered, if Martians did to Britain what the British had done to the Tasmanians?[5] The Tasmanians however lacked the lethal pathogens to defeat their invaders.

The replacement of humanity by an alien invader has also been closely tied to restraints, on immigration, in North America. Approximately every twenty years, or so, Americans experience a paroxysm of paranoia on the subject, resulting in immigrant bans and racial exclusion acts. The Chinese Exclusion Act of 1882, was the first real American law that restricted immigration on the basis of country of origin. There was also the Johnson -Reed Act of 1924, and America is currently experiencing a ban on immigration from predominantly Muslim nations.

Invasion, infiltration, and replacement aren’t topics exclusive to Science Fiction, as these are often covered in the Horror genre, and sometimes combined with SciFi.  In the 1955 novel by Jack Finney, Invasion of the Bodysnatchers, humanity is infiltrated, duplicated, and replaced, by aliens grown from plant like pods, while the humans sleep.

In the movie Us, the well to do Black family suffers a home invasion, by four people who look exactly like them, only less socially evolved. Their home is invaded by a shadowy “Other”, who happen to be “subhuman”  versions of themselves. During the invasion, the primary character, Adelaide, asks them who they are, and the leader of the invaders, a woman named Red, who looks just like her, says, “We’re Americans.” This is a conversational  echo  of the talking points of White Nationalism, which states that America is being infiltrated by “subhuman” beings ,who want to replace fine, upstanding White Americans. 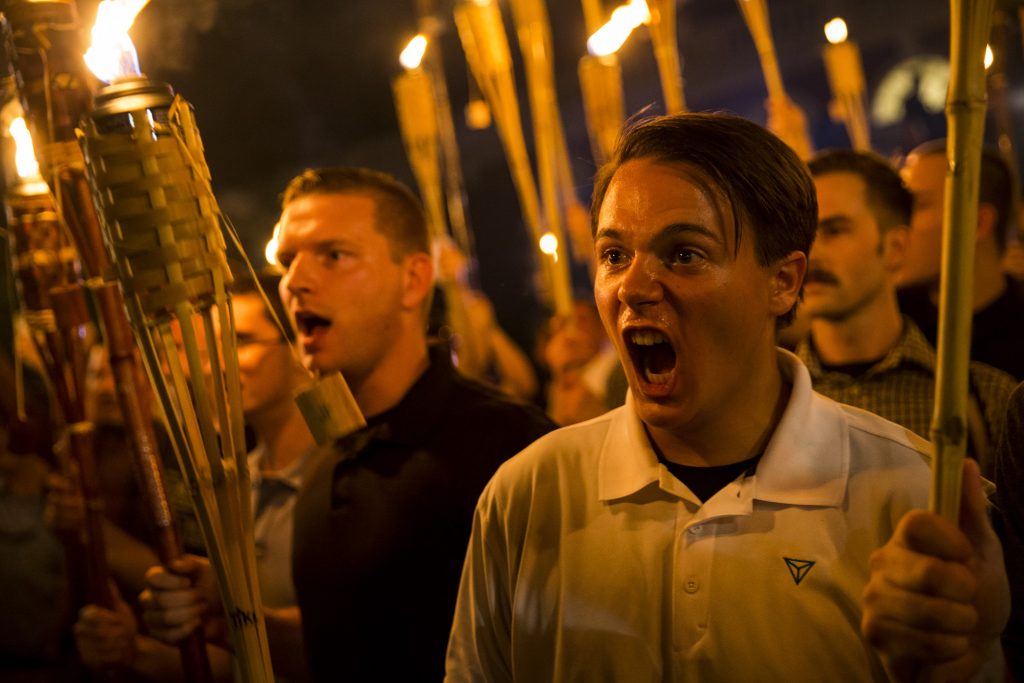 Us  introduces us to the unknowable, and alien, Other, through the use of the familiar (a duplicate self, for example), which is also connected to the Lovecraftian Mythos, through the racism of H. P. Lovecraft, whose many stories of the supernatural often included stories about the invasion of Earth by either vast unknowable beings, or degraded subhuman monsters who, in his mind,  were analogous to  other races of humans, like Blacks and Jews.

So long as modern stories of white genocide, superpredators, and the alleged master race find fertile ground on American soil, the contemporary relevance of Lovecraft will extend beyond what some fans care to admit.

There is a dialogue, (a pattern), occurring within the horror and thriller genres, between so many films. That dialogue revolves around the idea of violent colonization. So many of the movies depicted in Science Fiction, and Horror involve  invasion, or are the violent colonization of the human race, many of which happen almost exclusively in the West, and to Whites, which is understandable since the cultural output of Hollywood is almost entirely controlled by White men. The sheer numbers of movies, from the macro level (the colonization of Earth), to the micro level, (home invasion) cannot be ignored, especially since these topics are not usually found from any other countries that produce visual entertainment.

No. This is a pathology of the West, which has never experienced the violent colonization that it has visited on other countries.

But it’s worth remembering that in sci-fi, the future actually isn’t safe or sterile at all. On the contrary, with its alien invasions, evil empires, authoritarian dystopia, and new lands discovered and pacified, the genre can look as much like the past as the future. In particular, sci-fi is often obsessed with colonialism and imperial adventure, the kind that made the British Empire an empire and that still sustains America’s might worldwide.

I’m talking about a pattern  seen over several decades of film, from White men, (as the “kings” of their personal properties), having to defend, or avenge, their loved ones from personal home invasions, to White Westerners having to defend themselves against the global invasion of some extraterrestrial Other, this subject would appear to be a source of some anxiety, certainly if we  apply the same criteria used to explain the nearly thirty Godzilla films produced between 1954 to  this year.

In the original 1954 movie, Godzilla represented the destruction and fear of nuclear weapons and energy in Japanese society in the wake of the Second World War and American occupation.

In 2017, Charlottesville  Virginia was host to a rally by groups of  White supremacists called Unite the Right, in which they chanted. “The Jews will not replace us!”, and normalized the term “White Genocide” as a part of American political speech. This is the idea that a White homeland needs to be set aside to protect White people from going extinct. Of course what is never mentioned by this idea is, for America to become a White Ethnostate, the non-White population needs to be rigorously suppressed, or entirely expunged, neither is the European  invasion of the Americas, and the devastating effect that had on the Indigenous peoples, ever mentioned.

Throughout American history there have been several immigration exclusion acts instituted against various groups of people and countries that America decided were “invading ” this country. The Irish, the Italians, and yes, the Chinese, just like several Muslim countries now, have all experienced immigration restrictions, in an attempt to keep out undesirable people that were thought to be destroying America.

Since the release of  the movie War of the Worlds, the idea that one’s seat of comfort and control can be overtaken by unknown and hostile beings became one of Hollywood’s  greatest threats, from the micro level of  A Clockwork Orange, when street hoodlums invade a man’s house, injure him, and rape his wife,  to Straw  Dogs in 1971 where a man must take revenge on the men who invaded his home, and raped his wife, to  the Death Wish franchise in which a man takes revenge on the street thugs who broke into his home and raped and killed his wife and daughter. The rape of White women is often a prerequisite of the home invasion theme.

From the  level of the home intruder, to the  level of an alien invasion, White men’s greatest fear seems to be that someone will come along, break into their space, and/or take their stuff (or rather, what they have often forcibly claimed as their stuff). It’s a phobia so prevalent that it’s been used to spur gun sales. For example, the idea that angry Black people would break into their homes and kill them was an argument used to gin up gun sales during and after the Ferguson Protests.

…You mentioned the risk of home invasion, and the realistic fear that the cops just wouldn’t get there in time. That’s obviously a primeval motive to have a gun by the bedside or whatever. But the fear is also easily out of proportion to the threat. I had the Chicago police run the number on homicides. In 2011, precisely one homicide listed “burglary” as the motive. Nationwide, there are about 100 burglary-homicides every year. When you compare that to more than 18,000 gun suicides, the conclusions seem pretty obvious.

I talked  before about White western pathologies and how they often manifest their greatest terrors in  movies. Over the course of  8 decades we have seen White male pathologies play out in hundreds of invasion movies from the small and personal to the global and galactic which, when you look closely at it, is a theme which is essentially a chronicle of Manifest Destiny, White expansion, colonization, and genocide being visited on White victims.

White people are afraid that all the things they did to other groups of people in the name of White expansion  is what will eventually happen to them, and that that future is imminent and real.

President Donald Trump’s closing argument in the 2018 midterms was to vote Republican to save America from foreigners — an idea rooted in a fringe theory that whites are under siege, or “white genocide.”

“It’s like an invasion,” Trump said last week, talking about Central American migrants walking north through Mexico. “They have violently overrun the Mexican border. You saw that two days ago. These are tough people, in many cases. A lot of young men, strong men. And a lot of men that maybe we don’t want in our country.”

The people who have, historically,  been on the receiving end of  it, would simply call that Karmic Retribution.

Recently there have been a small number of home invasion films featuring African Americans as the main characters, like Breaking In, which stars Gabrielle Union, where the theme is how far would a mother go to save her children, and the movie, No Good Deed, where Taraji P. Henson is terrorized in her home by Idris Elba. There are currently not enough of these types of movies, with PoC, to point to an overarching  theme, as they exist more in the genre of Women in Peril movies than invasion films, but you can still ask yourself how the theme of colonization is changed when the characters, the invaded, and the invader, are of the same race.

One thought on “The Meanings Of Us: Colonialism”