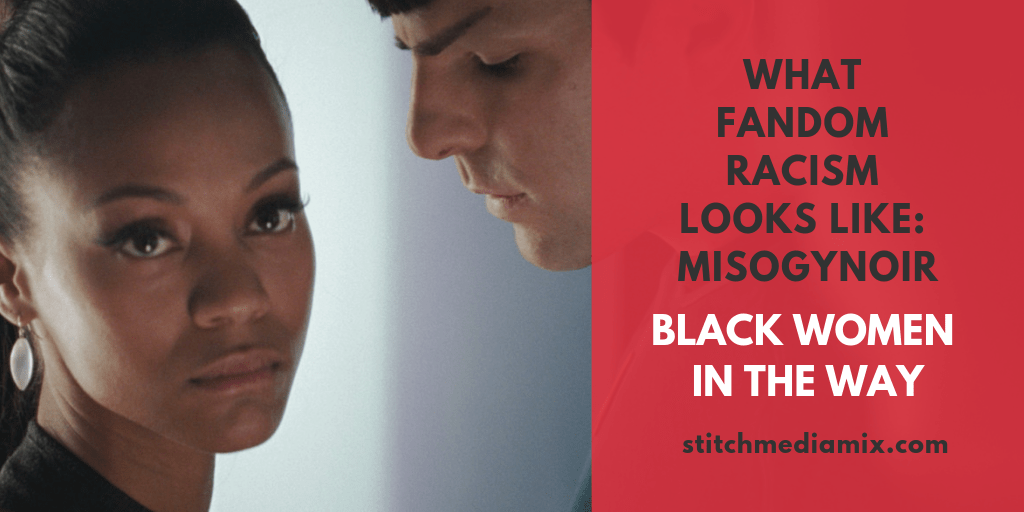 Don’t forget to check out last month’s post and the introduction! I may later eat my words because I haven’t seen more than season 1 of ToS or any of the movies but I hate that Uhura in the reboot is just a love sick puppy that follows Spock around. Like she doesn’t even resemble […]

via What Fandom Racism Looks Like: Misogynoir – Black Women in the Way — Stitch’s Media Mix

As I mentioned before, (and keep mentioning, because, above everything else), I want the reader to keep in the forefront of their minds, that fandom is not practiced in a vacuum. A lot of fandom tropes, and misbehavior comes directly from real life, and the fans own personal experiences, and knowledge, of race, gender, and sexuality, often imparted to them by a media that is by, for, and about White ,straight men, even if its on a subconscious level.

Fandom has been taught, by decades of media consumption, that Black women CANNOT be love interests. The media has not only taught White women, but has also taught Black women, that we are unloved, unlovable, and not capable of love, which is the foundation behind a lot of arguments that we are “strong, so we don’t need a man”. The foundation of this argument is the Mammy stereotype, who is often defemenized, or sometimes even masculinized, (as a sign of her strength), and who cares so much for her White patron, that she has no concerns for her own life.

The caricature portrayed an obese, coarse, maternal figure. She had great love for her white “family,” but often treated her own family with disdain. Although she had children, sometimes many, she was completely desexualized. She “belonged” to the white family, though it was rarely stated. Unlike Sambo, she was a faithful worker. She had no black friends; the white family was her entire world.

This stereotype is especially recognizable in arguments about how Uhura is too strong to need a man. Instead, she is meant to be background support of a mlm relationship, that has absolutely no chance, whatsoever, of becoming canon. It is interesting to me that in their erasure and denigration of Black characters, that so many fans (especially the ones who consider themselves feminists), tend to fall back on Black stereotypes they’ve consumed from media. To me, it shows the insidiousness of racism. That media that goes unexamined is media that has filled one’s mind with beliefs one may not actually “believe”.

It took me many years to root out some of the more damaging beliefs, about being a Black woman, from my own consumption of Pop culture, and this happened despite my mother’s vigilance in making sure that I consumed messages in other forms of media (Black media, for example), that did not reinforce stereotypes, so I know how sneaky this sort of  racist messaging can be.

As I always say, please visit Snitch’s Media blog, where she discusses the how and what of fandom, on the intersection of  race and Queer issues. That’s her area of expertise and I always go to her blog when I need to know what kind of fu**ery  the fandom has been engaging, and I like to riff on her posts, rather than subjecting her to one of my long winded comments on her blog.

My agenda isn’t so much what the fans are doing, so much as why fandom does it, and to tie her posts to wider media and Pop cultural narratives. There’s a reason why the fandom does what it does, and much of it can be laid at the feet of examined White supremacy that so many of us, (because I’m a fan too), have consumed.

Later, we’ll discuss how the consumption of racist narratives in Pop culture affects the self-esteem of Black girls and women, and how, due to the resurgence of source material created by, for, and about Black women, that’s slowly starting to change.