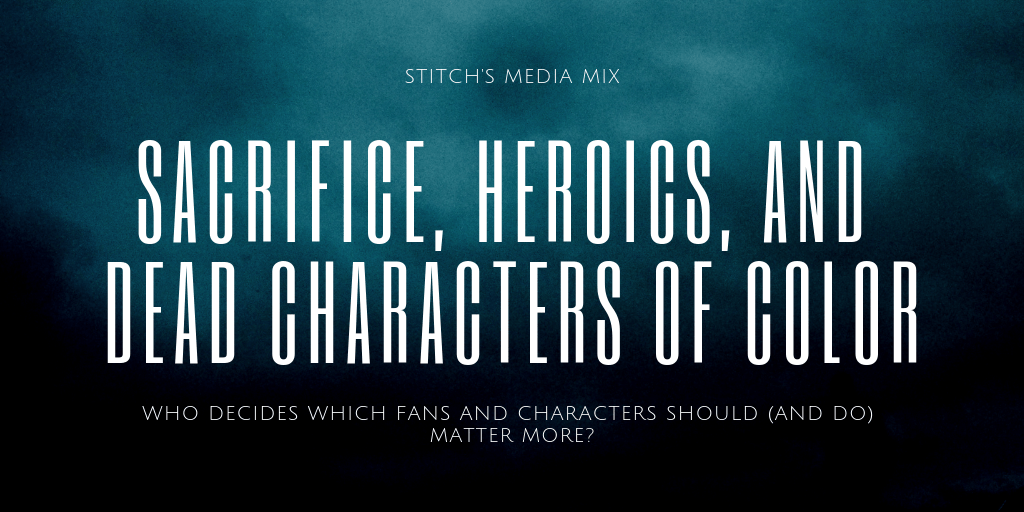 This post contains spoilers for Orange is the New Black season 4, Wynonna Earp season 3, Elementary season 6, Agents of S.H.I.E.L.D. season 5, and a bunch of other stuff that’s been off the air or out of theaters for years. I knew I was never going to watch Sleepy Hollow again when Nicole Beharie’s […]

This post by Stitch goes into the trope of Fridging of Characters of Color, and The Black Guy Dies First  trope, and the subsequent treatment of those characters by the various fandoms.

I just wanted to add that the corollary to having PoC die to further the narratives of White characters, are the PoC who don’t die for White characters. They just die. Those characters don’t get hashtags or meta written for them. None of the fandom cares.

In The Walking Dead, take a look at how fans treated Glenn’s’ death, and how many of these people actively petitioned that Michonne  should be killed by Negan  to further Rick’s emotional arc.

Just as in the real world, if a PoC isn’t serving the needs of a White person, (whether alive or dead) then their death is expected, sometimes excused, and  often celebrated. In the real world, when a Black person’s death doesn’t serve a White person, White  people will often make up excuses for why that person needed/deserved to be killed, and we can see echoes of that in those fandoms clamoring for the deaths of Iris West \, Scott McCall, and Finn. Just as in the real world, for a PoC, dying is the only way their life can matter to White people.