We got a surprise sneak peak at The Terror, Sunday night, after The Walking Dead. Monday night was the two hour pilot. I love it when television brings horror shows to TV, because such shows are kind of rare, and not always successful. (Like The Mist, which simply didn’t compare to its movie counterpart.) But after the success of The Walking Dead, we’ve been getting more horror genre shows, and that’s not a bad thing.

When I was a kid, I was fascinated by extreme environments, like mountains and volcanoes. We lived in a house behind my grandmother, who lived in a two family duplex, on the second floor. To get to her apartments, you had to climb a long, narrow flight of stairs. I remember playing on those stairs, all by my lonesome, holding tightly onto the bannisters and pulling my ten year old body up the steps,  yelling things like “HOLD ON!!!” and “DON’T LET GO!!”, while I imagined  climbing Mount Everest.

My fascination with exploring extreme environments only got worse, after I saw the 1982 remake of The Thing. To me, there’s nothing more terrifying than trying to survive extreme conditions, (mountains, the Arctic, social gatherings) which is probably the foundation of this fascination. (The other night, the 1958 Japanese version of The Blob, called The H-Man, came on TV, at 1 o’clock in the morning,, and I wisely opted to take my ass to sleep, rather than watch it, and stay awake for the next three nights. As brave as I am, there’s still some shit on TV  that can seriously creep me out.)

As far as the whole based on a true story concept: Yep! That part really is for real. The book, written in 2007 by Dan Simmons, is based on the 1845 disappearance  of the HMS Terror, and HMS Erebus, while they were searching for the Northwest Passage, in the Arctic. The book and movie are a speculation as to what may have caused their disappearances, although the actual historical theory is that the two ships got stuck in the ice, and that the men and crew set out on foot, in an attempt to reach Prince William Island.

In 1848, the Franklin expedition’s two ships, H.M.S. Erebus and H.M.S.Terror, disappeared with all their crew while searching for the Northwest Passage. Their fate is one of the enduring mysteries of the age of exploration. Numerous expeditions were sent out to find them, numerous theories proposed to explain what happened. Dark rumors of cannibalism only made the mystery more compelling. It wasn’t until 2014 that a Canadian mission, equipped with all the latest marine archaeological equipment, located Erebus. Terror was discovered two years later.

The wreck of the Erebus was found in 2014 and the HMS Terror was found two years later.

Their voyage to the Arctic was with Sir John Franklin in overall command of the expedition in Erebus, and Terror again under the command of Captain Francis Rawdon Moira Crozier. The expedition was ordered to gather magnetic data in the Canadian Arctic and complete a crossing of the Northwest Passage, which had already been charted from both the east and west, but never entirely navigated. It was planned to last three years.[3]The show is going to be pretty faithful to the book, in that the crew and officers will set out across land, facing various hardships, while being hunted by  a supernatural creature, that’s  been set upon them by the Native shamans of the area. I haven’t read the book in a minute, so I’m not certain if they were cursed because they committed some misdeed against the Natives, or if the Natives were simply trying to drive them away.

The hour long version is   setup for what will be happening for the rest of the season, and really does capture the sense of frosty dread from the book. One of the ships damages its propellers, and the captain and crew realize they can no longer stay on either ship, and set out across land in several groups. The plot introduces the two captains, the various officers, and crew, of both ships, and outlines the different factions and cracks in their unity. There are several personality clashes. For example Captain Crozier, and Franklin’s First Officer, roundly detest each other, with Crozier often sniping wickedly at the First Officer, who keeps trying to impress upon the others, how dangerous the environment is. Cozier is a morose, insufferable, ass, who  likes to tell tales about his previous adventures in exploration. 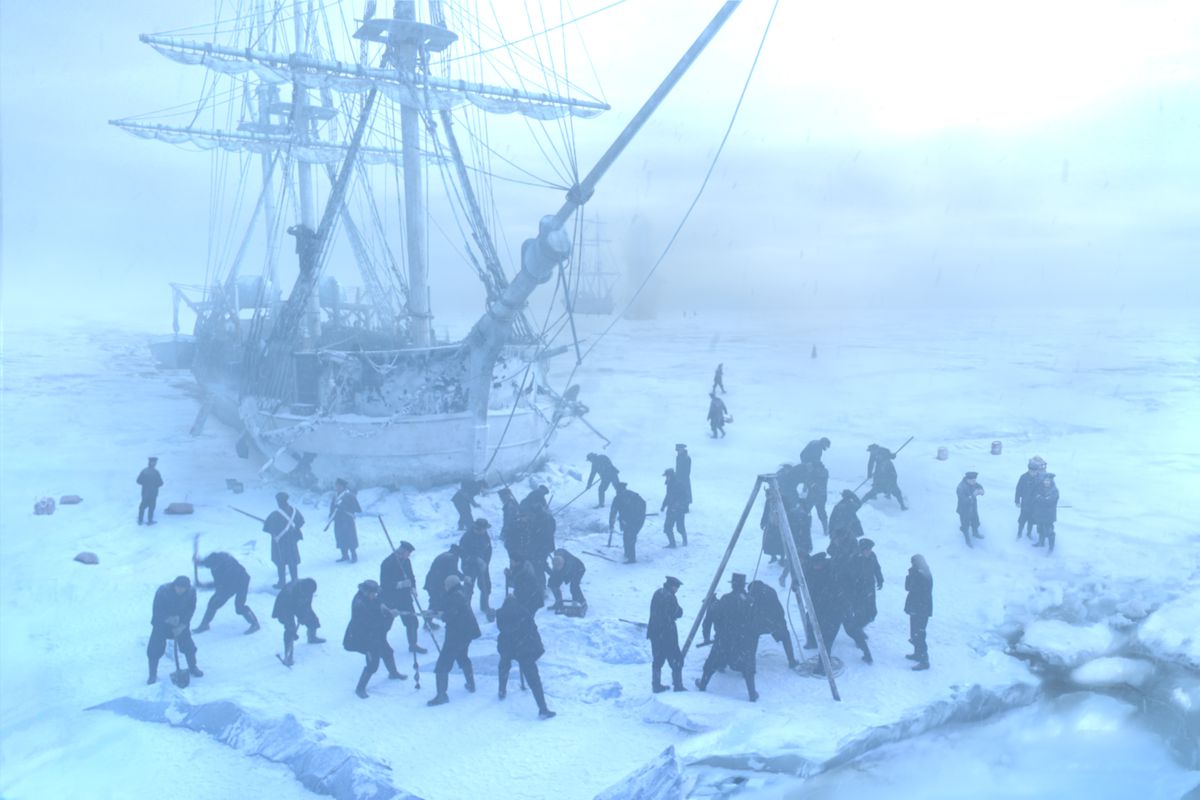 Not only will they be dealing with the extremes of their environment but also diseases like scurvy, which is what happens to the human body when it doesn’t receive enough Vitamin C. (To that end, all of the crew are rationed a certain amount of lemon juice per day.) One of the crew-members is diagnosed with consumption, and dies immediately after he sees a vision of an Inuit man who warns him to “Run Away!”

When the Erebus is halted, one of the crew-members falls overboard and drowns, the crew unable to save him quickly enough, before the cold numbed his senses. So one hour into the show and already two crew members have been lost.

What’s different from the books are the minor historical details. In one scene, Captain Franklin remembers attending a play with his “woman of interest” (as they are not yet married), and you can see that the play consists of recounting his many adventurous exploits in the form of Tableaux.

In a tableau, participants make still images with their bodies to represent a scene. A tableau can be used to quickly establish a scene that involves a large number of characters. Because there is no movement, a tableau is easier to manage than a whole-group improvisation – yet can easily lead into extended drama activities. It can be used to explore a particular moment in a story or drama, or to replicate a photograph or artwork for deeper analysis. 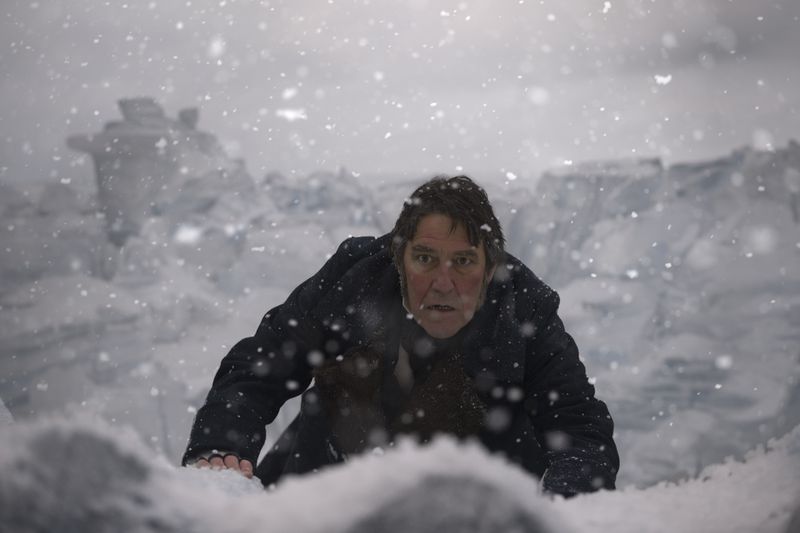 Another change from the book, are the levels of racism and bigotry against the Indigenous peoples of the Arctic. Later, the crew encounter and adopt an Inuit woman and her companion. In the book, we are privy to a lot of Crozier’s thoughts on Native inferiority, which is thankfully absent from the show, but nevertheless, is entirely in keeping with the obnoxious sense of superiority of the English military, at that time.

The most fascinating part, for me, were the crew interactions. Among the non-officers, there’s a surprising amount of camaraderie and fellowship, but there are fractures among the officers, especially those who have survived Arctic explorations before. Once things really start to get tough we can see along what lines the breakage will occur among the crew, because not only will they have to deal with the extremes of the environment, but their numbers will be steadily whittled down by the creature that’s hunting them. A creature that defies description, occasionally walking on two longs or four. In the book, this creature is never really named or described, and relentlessly follows the crew. I personally pictured something along the lines of a were polar bear, but I hope the show doesn’t actually show the creature, as much of the terror in the book, comes from the crew speculating about what it is, and what’s happening.

In the second half of the pilot, which takes place eight months later, the officers argue about what to do about the Erebus, and Franklin, being unreasonably optimistic, believes Prince William’s Island is only a few miles away, saying they will not abandon either ship, and  he sends out a small party. You have to remember this story takes place over several years. Also, the ending of the book is somewhat surreal, with Captain Crozier being taken in by the Inuit, and having visions of the future.

I’m really looking forward to this show because I greatly enjoyed the book. The show looks gorgeous, and cold! and  the production values are top notch. If you liked the mood of The Thing, then you should give this a try, but need to keep in mind that, just like that movie, at least right now, there are no women on the show, and that, keeping with the time period, the men are virulently, and openly, racist and sexist. You’re probably gonna hear them say some things that will outrage you, along with the frustration of listening to these men make bad decision, after bad decision.

AMC continues to knock it out of the park with show after show. The network seems to have an unerring instinct for what audiences want to see,  and manage to field some impressive talent in front of, and behind the cameras, and so far, this show has been very well reviewed, and received.