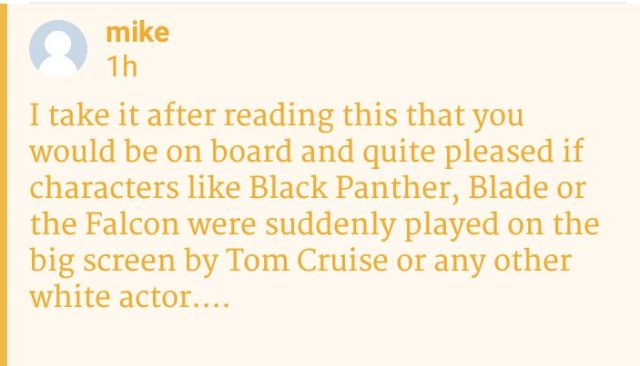 Whenever I talk about racebending as a concept when it comes to comics and comics-related properties, smartasses always show up to say something snarky like “what if Black Panther or some other Black hero were a white guy”. They crowd into my mentions or any comment field they can get a hold of, trying to […]

via “What if a white guy played Black Panther?: The Fake Concern of Fake Geek Guys — Stitch’s Media Mix

**And for further reading, the distinction is that Whitewashing is bad and Racebending is okay, and here is why:

Dear Comic Fans: We Get it. You’re racist and racebending scares you.

The Incomparable Differences between Whitewashing and Racebending

Whitewashing vs. Racebending: Yes, There is a Difference

**And further readings on Race and Media for the weekend include a description of harassment in the Art world,  for speaking the truth, which is important to me because I’m an artist.

This ties into America’s general belief that History was all White, and that PoC played no part in European History at all. As Dr. Who said, “History has been whitewashed!” And yes, I blame Hollywood, and America’s  general historical ignorance. It’s this ignorance of the part PoC played throughout every era of human history that leads to cries of “Historical Accuracy” every time a Black person wanders into the orbit of, not just historical films, but any Fantasy films that have a foundation in European folklore.

**And on Race and Fandom Wankery…Stop It! Fandom is every bit as racist as non-geek culture, but Klandom thinks it’s better at disguising it. There has also been some confusion about patterns of implicit racism vs calling individuals racist.

Thinking that you are personally being called out on your racism is basically the Racism 101 approach to this topic,  because we’re not talking about individual people, although individuals may be used as examples of what were drawing attention to.

The discussion that PoC and LGBT people are having is from the 401 Class, and seems to be over quite a few people’s heads. We’re discussing patterns of behavior across multiple platforms. We’re not talking about a handful of bigots, writing stories we don’t like, but  about hundreds of people across fandom engaging in the same behavior, and then making the exact same excuses for their behavior, over and over again.

We are supposed to be the most progressive and transformative community in pop-culture.

Fandom likes to imagine itself as being progressive because of all the slash – a mechanism of progress which conveniently boils down to extra attention on overwhelmingly male (and overwhelmingly white) characters. This form of progress is one which takes a minor deviation from the social norm (homosexuality), only to end up ultimately supporting or even amplifying the status quo, by virtue of over-focusing on male characters (and over-representing white ones in the process).

Strip back that gay window dressing, though, and you’ll see that at best, fandom is just as socially stagnant as mainstream media and mainstream culture – or even worse, by virtue of engaging in media that overwhelmingly sidelines several other marginalized groups in order to prop up one.

Professional women have long known the old adage, “Whatever women do they must do twice as well as men to be thought of half as good.” What no one seems to realize is that fandom is still doing exactly the same thing.

Mainstream media is keeping up with the times and with social progress just fine, it’s us who’ve deluded ourselves into believing that we, as a community, are more progressive than we actually are.

And Danae Guriria lays it out:

**And on Hollywood Erasure. This topic is especially interesting to me becasue I know there were Black cowboys. When Slavery ended, a lot of Black people fled West, rather than North, which is how and why there are so many black people in places like Minnesota, Oklahoma, California and a huge Black population in Texas. I know there were Black Cowboys (and many many Mexican ones) but this is something most Americans don’t no about due once again to Hollywood Whitewashing. The remake of the Magnificent Seven is a lot more historically  accurate than the original.

Although the reception of that movie proves one more thing to me, that Denzel Washington can make whatever the Hell movie he wants, and no one will criticize him for historical accuracy. Apparently, he belongs in any era he wants.

The LIT History Series is for the Legends, Innovators and Trailblazers that have shaped our culture.

It is widely believed that the “Lone Ranger”, the famous cowboy of the TV show and the movie, was inspired by a Black man named Bass Reeves.

Reeves was born a slave, but he escaped to the West where he eventually became a Deputy U.S. Marshal, an expert marksman, and a master of disguise with his Native American sidekick. Blacks were a huge part of the Western frontier despite what’s told to us in pop culture or taught to us in the classroom. “The kids who are learning history in our schools are not being told the truth about the way the West was,” says Jim Austin, founder of the National Multicultural Heritage Museum. “I bet you nine out of 10 people in this country think that cowboys were all white – as I did.” (x)

Cherokee Bill, born Crawford Goldsby, was a notorious outlaw whose father was a Buffalo Soldier. His reputation and career as an outlaw rivals the reputation of Billy the Kid. Bill Picket was a “famous” Black cowboy who toured the U.S., Canada, Mexico, South America, and England, and he was inducted into the National Rodeo Hall of Fame 40 years after his death. (x)

And black cowboys are still here, they do exist.

That’s a huge part of history that was also erased from the history of America. We need to bring attention to this, because it’s unfair that black people along with other people of color have been erased from this narrative.

3 thoughts on ““What if a white guy played Black Panther?: The Fake Concern of Fake Geek Guys — Stitch’s Media Mix”