I had written an essay about this but scrapped it, because I wasn’t saying what I wanted to say, without getting sidetracked by secondary issues. I think some other writers have explained this a lot more clearly than I would have.

Note: We are not saying that WW is a bad movie, or that the 25 year old white nerdgirls at which this film is aimed, shouldn’t enjoy it. Love the fuck outta this movie, if that’s your appealing! I understand that there are a bunch of Jewish women who are really loving the representation from Godot. I got it. Hell, we got Luke Cage, and Black Panther, so let Jewish women have their thing.

Let me make something clear though: I don’t hate the movie. Its not much different than the many, many, other action movies, starring a white woman, from Selene, to Ripley, to Sarah Connor, that I’ve thoroughly enjoyed, and even loved. I’ve also heard its a fun movie, so that’s not what this criticism is about. What I’m having a problem with is, once again, white women are putting themselves in the position of speaking for ALL women, in saying that this movie is a win for feminist representation in superhero movies, without considering intersectional feminism. Black women can count on one hand the amount of real representation we have in superhero movies, and in this movie specifically. For Latinas, and Asian American women, it’s even less. None of them are adequately represented in this movie either.

My problem is with white women’s claims about this movie, not the movie itself (which is a whole other subject.)

‘Wonder Woman’s Feminism Is Strong As Hell, But It’s Not Intersectional 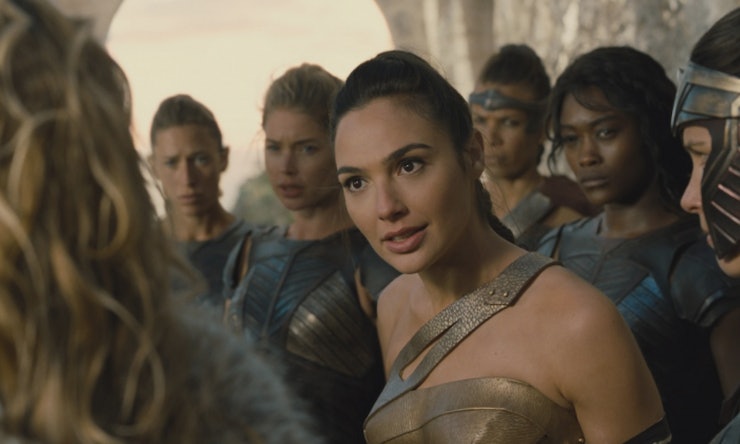 As both a woman and a longtime fan of superhero movies, the success of Wonder Woman at the box office has made me happier than I can express. But as a black woman and a longtime fan of superhero movies, the actual content of Wonder Woman depressed me. Racking up $200 million worldwide on its first weekend, Wonder Woman‘s status as a superhero film starring a woman and directed by a woman has made it a feminist victory in ways having nothing to do with the all-female island of Themyscira and the inclusion of lines like “Be careful in the world of men, Diana. They do not deserve you.” But I’m sorry to say that Wonder Woman is just a white feminist victory — barely. For black feminists, it’s exactly like every other superhero movie, just with a white female lead.

IF YOUR FEMINISM ISN’T INTERSECTIONAL THEN ITS NOT FEMINISM!!!! Gal Gadot, by her own admission, is ¼ Austrian, ¼ Polish, ¼ German, and ¼ Czech. Her white Eastern European grandparents immigrated to Israel after surviving the Holocaust and her parents Hebraized their surname. Being born in Israel does not change her racial background of white Eastern European, and being Jewish does not change her racial background of being white Eastern European. Jewish is her ethnicity and religion, Israeli is her nationality, white is her race. She can be oppressed as a Jewish Israeli and this doesn’t stop her from being white OR from benefitting from white privilege, especially here in the United States.

She’s white enough to play a white person in Wonder Woman (because Diana is not even questioned in WWI era Europe for her dark hair and eyes) which makes her white enough for this movie to not be a win for WOC.

I can’t agree more with all of this. I admit that I do have a passable whiteness level being half Puerto Rican. People treat me differently than my own relatives and it sickens me. Representation matters so much more with WOC than just seeing a white womam in a movie. I think TV series are being more progressive with including more WOC in lead roles, but it’s still not enough to be equal to the countless shows that star the same skinny white woman. This is the same issue I have with the new Star Wars movies: too many skinny white bitches that look EXACTLY THE SAME. These movies take place in a fantasy realm that still idolizes this body and race type. How the fuck can you accept traveling at light speed between galaxies if the only women that exists in this relm looks like a carbon copy of some UWS white bitch? Lupita Nyong’o was robbed in TFA by playing an animated character. SHE could have absolutely played Rey or even Kelly Marie Tran. In a galaxy that has planets solely dedicated to wookies, how the fuck could they think that logically the only women who would want to fight the first order or be a jedi must be a skinny white woman? How? Our planet is diverse so the galaxy should be represented as a wildly diverse collection of characters who come from different backgrounds and body types. I’m so sick of seeing women like Natalie “boardface” Portman or Jennifer “get over yourself” Lawrence in scifi/fantasy films where their acting is as lively as a dried up sponge. I hope that more women get involved in writing and directing films in this genre so that they can create more opportunities for WOC. Men love to cast these roles with the same average basic white bitch, so it’s time for us to step Up and create these roles for ourselves. Representation matters so much more than ever before.

*I suppose at some point in the future, I’ll be out of my feelings enough to watch, and enjoy this movie, but for now, WW isn’t getting a dime out of my wallet. I’ll watch it on cable next year, and I will probably really like it, but only long after I’ve forgotten the white foolishness surrounding it.