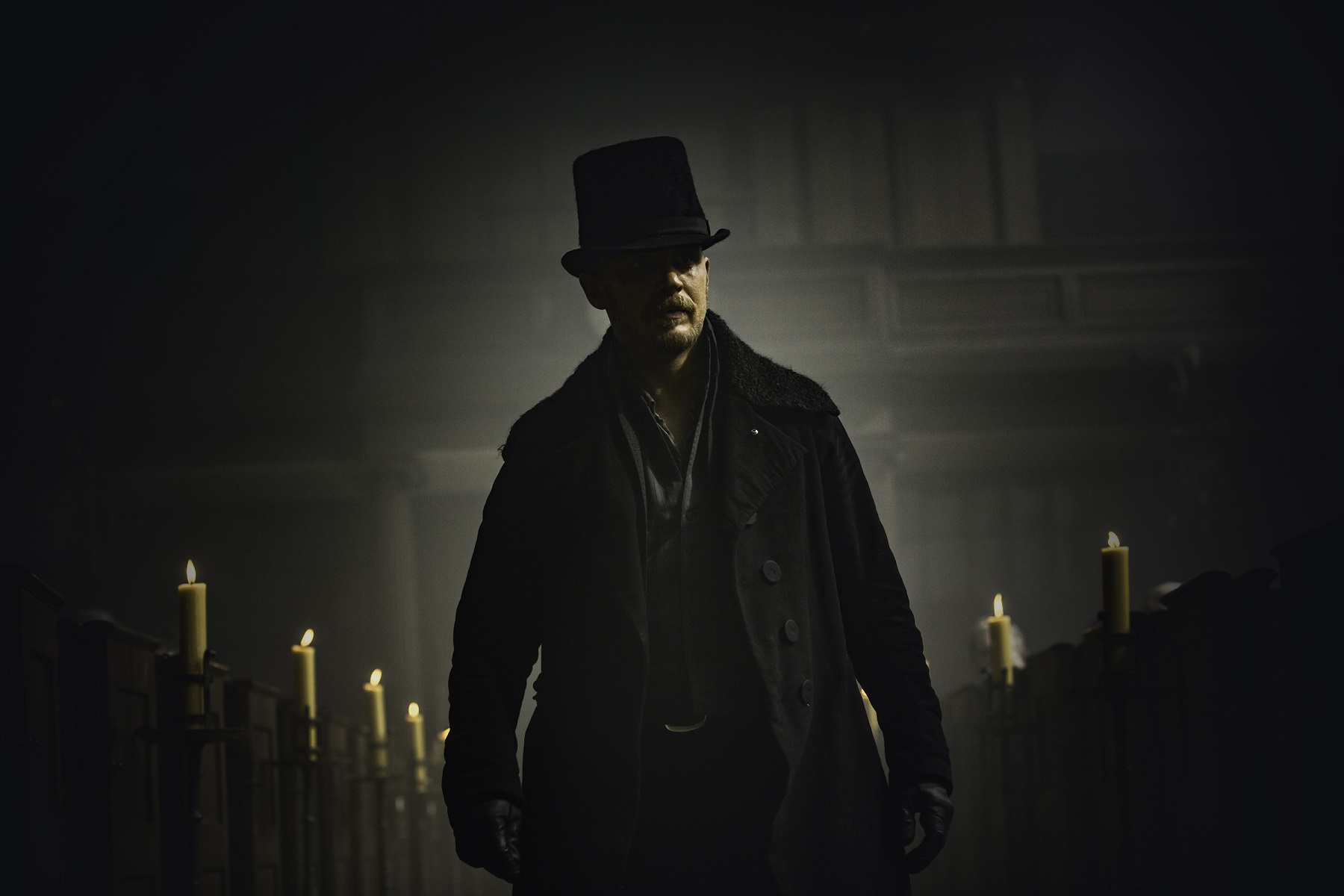 I have a lot to say about this show, so let’s get started.

This show has been hyped to within an inch of its life, so naturally, I was really excited to see it. It stars Tom Hardy, and a host of other British people I didn’t bother to learn the names of because…ITS FUCKING TOM HARDY!!! And Tom Hardy is one of the few actors that I will  watch read a listicle, naked, while he sits in an empty room.

Now, let me get  this out of the way before I get started reviewing. There was a nasty rumor started about this show before it aired. It basically accused Hardy of racism because, as this one person (and once I researched it, I realized it’s really only been that one person, under a pseudonym, on a gossip website), says that he cast himself in the role of a bi-racial character, and that  the show is full of racist slurs against that character (which is true), and Africans in general.

Now, once this rumor hit Tumblr, it grew legs, and some of the more hysterical members of Tumblr immediately went on about how Hardy should be cancelled, how the posters will hate him forever and ever, and how much they hate the show.  My attitude was they should first research where the rumor came from (because at this point, two days before the show aired, that’s all it was, and a little too convenient for my tastes), wait until the show actually aired to formulate an opinion, and well, the show is set in 1800s England, so yeah there’s gonna be some Africa hatred occurring on the show.

Now, if you’re offended at hearing racial slurs, no matter the time period, I understand, and you should, by all means, not watch shows that will upset you. But just so you know, having racial slurs in a period piece is really just historical verisimilitude, and is no different than watching 12 Years a Slave, or Django Unchained. That is exactly the sort of thing White, English, citizens did very casually in 1814.  If you refuse to watch any period film because you’re sick of hearing racial slurs in movies, then I understand that.

I did watch the episode and here’s what I came away with. None of the racist slurs are aimed at Hardy’s character, but they are said ABOUT him, usually behind his back, and as far as I know, he isn’t a Black bi-racial. His mother’s race is not mentioned, although it is mentioned that his father bought his wife. (Buying a wife was not uncommon in that time period. All women, and not just Black ones, were considered commodities then, and white women were routinely swapped around, for all manner of reasons, like securing business ventures, or gaining someone’s inheritance.

At no point in the narrative is he ever shown as a victim of racism, or as any kind of victim at all, other than of his past and own conscience. This is a character with a lot of power over the people he meets because he’s unpredictable, and no one has any idea what his agenda is. This is also a character who realizes this during the course of the episode.

The people around him are upset because they thought he was dead, having been killed in Africa. When he returns, he is a very different sort of person, who speaks several Native languages, and talks in obscure metaphors. Also, his father suffered a bout of insanity just before his return, and people think he inherited that, not knowing that the insanity was caused by arsenic poisoning. There are more than a few sexist, and ableist slurs in the dialogue, but that one outraged person, who started the racism rumors, didn’t seem to catch any of those, which are also entirely in keeping with the time period. That was  how people talked and treated those with mental illness at that time. So, I’m gonna warn you, if you don’t want to hear that kind of stuff either, you need to skip this particular show.

I noticed that instead of condemning the show, they condemned the actor for writing  it. There has been  a long argument on Tumblr about how much culpability White actors should bear for  starring in vehicles with racist  narratives, or taking roles that could have gone to PoC. I try to take that on a case by case basis. This is not a defense of Tom Hardy, though. This is a defense of the show. If it turns out to actually be problematic in ways I can’t bear, then I’ll will stop watching it.

So far, I’ve enjoyed what I’ve seen of it, and   will be watching it, on the regular. It’s a gorgeous, dark, gritty show, but not as bad as Game of Thrones, although there is what I thought of as a gratuitous sex worker scene. I was expecting to really get into the characters, but was surprised to find the political intrigue very compelling.

Hardy plays a man named James Delaney, who returns after a long sojourn in Africa and being thought dead.  In the meantime, his sister and her husband, have  inherited everything, including a parcel of land their father owned in America. It’s a huge surprise when James shows up at his father’s funeral. In competition for the parcel of land is one of the most evil corporations to ever exist out of England: The East India Company.

One of the former members of The East India Company, now haggling for his plot of land,  used to be in charge of a military regiment in which James was also a cadet, before he began acting strangely. Like Colonel Kurtz from Apocalypse Now, he had an exemplary career. He was the perfect soldier, until he had an attack of conscience, after finding out exactly  what he was working for. He spent the next two years whoring, drinking, attacking his own officers, and generally corrupting his brother cadets, until getting lost in Africa. I had the impression he was more haunted by his past actions, as a soldier for the East India Company, than anything that happened to him in Africa.

The first episode is mostly spent in establishing exactly what James’ relationship is to various people. His sister is really his half sister, and they used to have an intimate relationship. It’s strongly suspected that she had a son by him, that neither of them  can acknowledge. James’ father went insane just before his return and embarrassed the family. James has his father’s body exhumed, by a Resurrectionist, and discovers his father was poisoned with arsenic. His sister’s husband hates him and is plotting his death because he stands in the way of the land inheritance, that he and his wife desperately need for the money. The English government desperately wants that plot of land as the British/ French/American war comes to a close, the land is strategically viable, and James refuses to sell it.

James appears to have superpowers, of some kind, as he keeps knowing stuff he’s not supposed to know, like his father dying. When one character says his father kept calling for him before he died, James says he knows because he heard him, which is creepy, no matter what he means by that phrase. Does he employ spies or is he psychic?  Everybody in the cast has secrets. Even their secrets have secrets and there’s just enough information parceled out to keep the viewer strung along.

The cinematography is gorgeous. The skies are cloudy all the time, everything is dark and gloomy and covered in dirt, including the people, which is exactly how I like my stereotypes of Historical England. James wears a giant Beaver Hat for the entirety of the episode. Its almost like another character on the show. I wonder if the hat will get some lines of dialogue. he talks in a dark gravelly voice, sort of like a Victorian Batman, and everything is just dark, and grim, and darkgrim. Even that Mad Max movie had sunshine and people occasionally laughed at something. Nobody looks as if they’re enjoying themselves, but all this does is remind me that the past was waaay more horrible then the modern world, which actually makes me feel a little bit better.

Oh, and here’s the review that sparked the rumor on Tumblr! (Out of all the possible reviews about this show!) I dont agree with a lot of it, and parts of the review were hilarious, but you can decide for yourself. Is the show racist? Is Tom Hardy?

6 thoughts on “Taboo : Episode One: Well Yeah, Its Racist! Ableist! And Sexist!”