Trompe l’oeil: a painting or design intended to create the illusion of a three-dimensional object. A French word meaning “deceive the eye”.

The beauty of  the Westworld series is that it all relies on the visual perception of not just the Guests and Hosts, but the viewers, as well. According to Ford, the Hosts can’t see anything that might hurt them, but we should.

This series is full of deceptions, but a lot of masks came off for this episode, as Charlotte plays her hand, we find out who Bernard is, and William and Dolores, take things to the next level. Actually, none of the revelations are huge surprises, if you’ve been paying attention, as the show has been dropping little clues and hints all  season. But like I said, I’m pretty bad at speculation, so I just notice  these things, and move on, allowing the show to take me wherever its going.

Its a little like sightseeing, with other passengers pointing out highlights, we should pay attention to on the tour. Other people use these highlights to guess what their final destination might be, but I’m mostly  just going to take notes, and enjoy the ride, especially in a show as layered with meaning as Westworld. 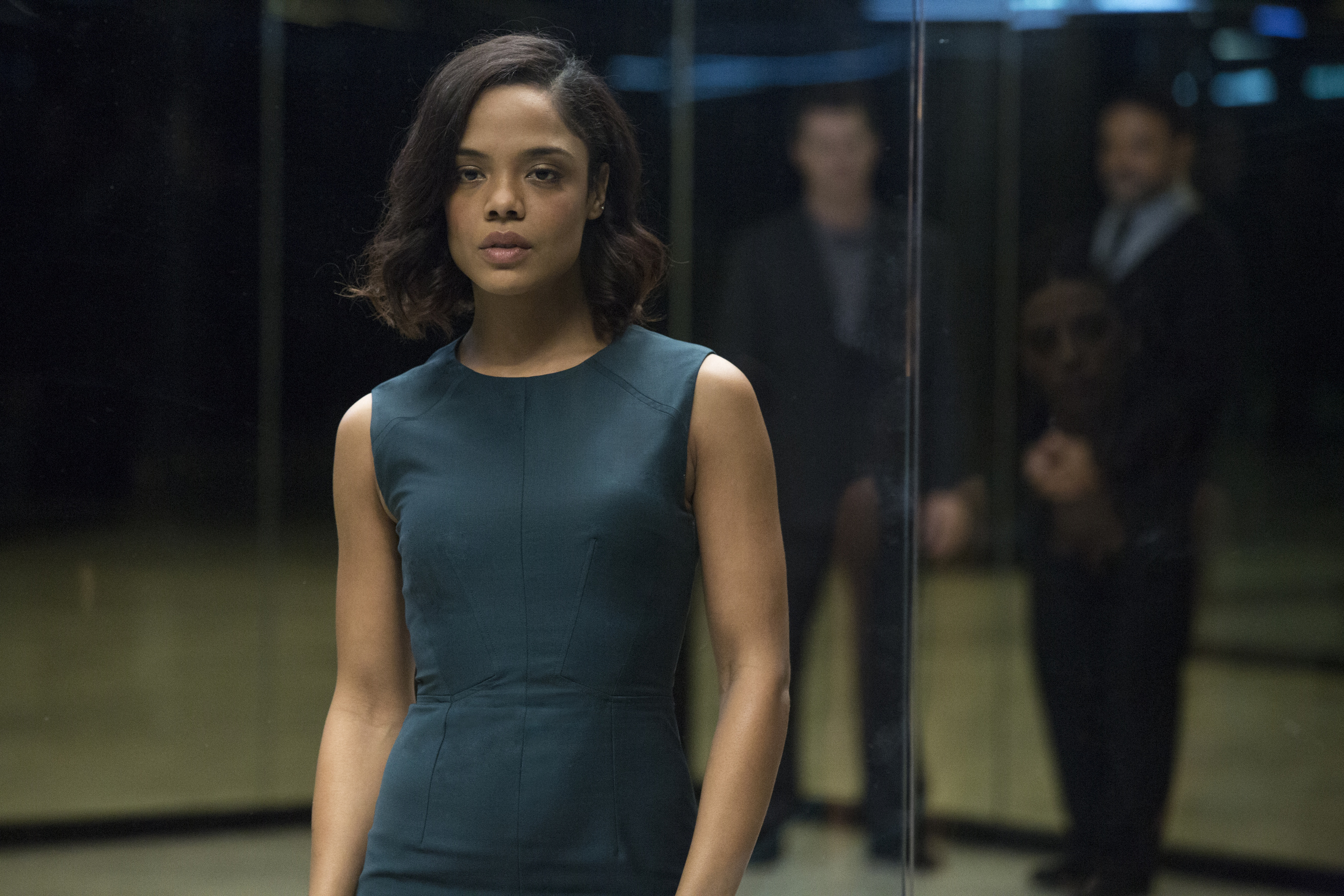 Charlotte Hale, and Theresa, are working together to overthrow Ford’s ownership of the Park. Now, Ford warned Theresa not to get in his way, and her hubris at thinking she could best him with her juvenile actions, gets her killed, at the hands of her former lover, and newly outed Host, Bernard. Charlotte and Theresa ,while not new at manipulation, are not in Ford’s league. He’s a master chess player, who seemingly knows what they’re going to do before they do it.

I know a lot of people speculated about Bernard. It was one of the big theories of the series. Well, such people had ample reason to look smug, as it was finally revealed that Bernard has always been a Host. I enjoyed this revelation, but I wasn’t exactly surprised by it, as I’ve watched these episodes several times, and followed the trail of breadcrumbs that other people were pointing out to me. They all had some  very compelling arguments, which finally  paid off.

William has decided he’s going to stop pretending, saying to Dolores, that he’s been pretending to be something he’s not his entire life, but now that’s over. He’s going to be his true self from now on, which just furthers everyone’s theory that William is actually the MiB, about 20-30 years ago, and that he and Dolores are in another timeline. He and Dolores make out, and I kinda knew the direction they were headed, so no surprises there. Its interesting to me that its Dolores who makes the first move, professing her love for William.

Dolores has revealed that she is now totally in pursuit of her own goals, and William is just along for the ride, as her dreams lead her further and further away from the life she once lived. It does make me wonder, if this is the past and William is actually the  MiB, then in the present times, he may not have actually raped her in that barn. He may have been doing something entirely different. The show has made it pretty clear that nothing is as it seems,  so why not that event, too.

In their efforts to oust Ford from power, Charlotte and Theresa stage a show for Ford and the others to demonstrate how dangerous the new Reveries program might be to the Guests. Something that Elsie (who is missing this episode) took great pains to find out, and was fairly alarmed about, is just casually thrown out there by Charlotte, although in her case it’s faked. She and Theresa make a blood sacrifice of the guard and  Clementine, and we find out there are other employees wandering around who are actually Hosts.

Now, I don’t know if everyone at the demonstration knew that the guy Clementine killed was a Host already, or if that’s something only Ford knew, but it was interesting that, as little sympathy as the employees seem to have for the Hosts, the women all looked acutely uncomfortable at watching Clementine be brutalized by this man. At any rate ,their little demonstration was faked to make Ford’s updates look bad, and  give the Board leverage to use against him. They  used  most of that leverage to fire Bernard, since they can’t directly attack Ford because he is incredibly valuable. Charlotte made it very clear in her interview with Theresa, the Board only cares about the Host’s technology, and to Hell with its employees. What they want to do is reduce the amount of power Ford possesses, so they can get their hands on it, but Ford is several moves ahead of them.

He’s had a lot of practice at this game. As he says, every few years the Board  makes some  effort to bring him to heel, and Theresa is just their latest cats-paw. When he orders Bernard to kill her, we see a new Host body being created in the background. Some people are already theorizing that its Theresa’s replacement. This has the added benefit of unsettling the viewer because now we start wondering are there any  other Hosts wandering around the facility pretending to be humans, and who might they be.

Its almost heartbreaking to watch it slowly dawn on Theresa that she is about to die horribly. I say almost, because I never really warmed to Theresa, although she was certainly a smart and complex character. Her terror is especially sharp, after staging that demonstration showing  how powerful Hosts are, and what they’re capable of. She essentially just watched her own death several hours earlier. She knows exactly what Bernard s going to do to her. The signature move of the Hosts is to bash their victims heads.We saw that in the episode where Elsie was almost attacked, and again with Clementine.

My heart really broke for Bernard though as he is confronted with the knowledge that he’s not human, and never has been. We opened the episode with Bernard having a nightmare about the death of his son, so its especially poignant to discover that those memories, memories that he’s used to push Dolores towards sentient awareness, aren’t real. Unless of course that too is something that was orchestrated by Ford to influence Dolores in the direction he wanted her to go.

Of course one of the prevailing theories is that those scenes of Bernard talking to Dolores are really scenes between her and Arnold, when he was alive, just after he lost his son, and just like Ford claimed Arnold made Host copies of Ford’s father, maybe Ford made Bernard in Arnold’s image. When Theresa asks if Bernard killed Arnold, Ford says Bernard wasn’t around then, but Bernard has been around for an extremely long time, though. When Theresa finds the drawings of Bernard’s schematics, the name on the sheets is carefully missing, whereas on drawings of Dolores’ schematics, her name is prominently displayed.

The jury is still out on whether, or not, Bernard is actually Arnold, or if Arnold was even a  real person, or just some myth that Ford made up as a another layer of protection between him and the corporation. I’m going with the idea that Arnold was a real person, but what furthers this theory is that Ford seems to be the only person who knows everything that’s going on in the Park.

Meanwhile, Maeve has decided she’s not going to live in the Park. She wants out, especially after she inadvertently witnesses Clementine being decommissioned, after  the Delos demonstration. She cajoles and threatens Sylvester and Felix into helping her, although I get the distinct impression from Felix that he’s helping her because he’s curious to see where this is going. He mostly seems shocked at Maeve’s boldness, and seems to really like her. He doesn’t seem as entirely opposed to the idea as Sylvester, who hates her guts. I suspect Sylvester isn’t long for this world, as this is the second time Maeve has threatened to kill him. She’s never threatened Felix, though.

The big action set piece this time is the three-way fight between Lawrence, Dolores, and William, who are trying to escape the Confedorados, who are mad at Lawrence for betraying them, and the Natives who attack the Confeds because they’re angry at all these people trespassing on their land. Its a gorgeously shot scene, with lots of nice stunt riding on the part of the actors.

Now, I’ve seen some Tumblr pieces vilifying the show for being racist. Yes, the show contains racism, but there’s a reason for it, just like all the other narratives in the show. (Except for that lesbian thing. That’s just weird.). Things aren’t what people think they are and if they are just looking at the surface layer, they will come away with the wrong idea. The creator, Lisa Joy, is an Asian-American woman, who is not simply reproducing the racist narratives she’s been told her whole life. She is meditating on them, and in many ways, subverting them.

Normally I would address this in a long rant, with receipts and bullet points, but its  apparent that would be kind of a waste, because its Tumblr, where very young people go to test out their critical thinking skills, and  none of them seem to have watched the show beyond episode three. In order to understand the show, you can’t just look at what’s happening on the surface. So, what I’ll do is leave this here again:

Its not a perfect meta, and at some point I may redo and re-publish it,  but hopefully people who read it will get some idea that the issues of racism they’re seeing, are much more complex than they are  at first shown. The entire series is predicated on deceiving the eye, remember?

Here’s review that I especially enjoyed: