Tumblr is also good for random internet silliness and geeking out too, its not all teen angst over celebrities being problematic.

Tumblr is still the best place for dragging dumbasses and/or bigots,though.

Be careful what ya wish for Becky 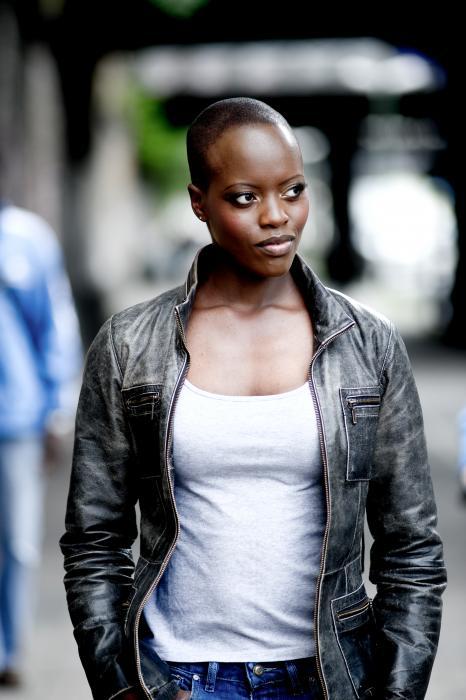 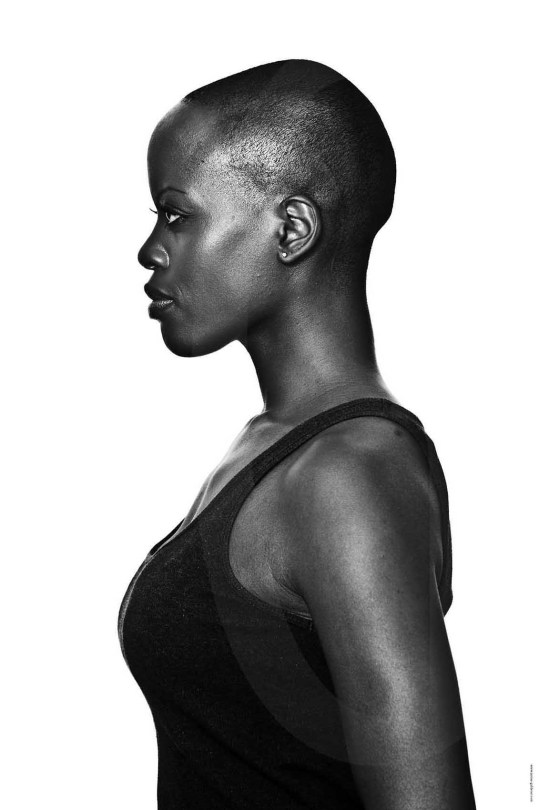 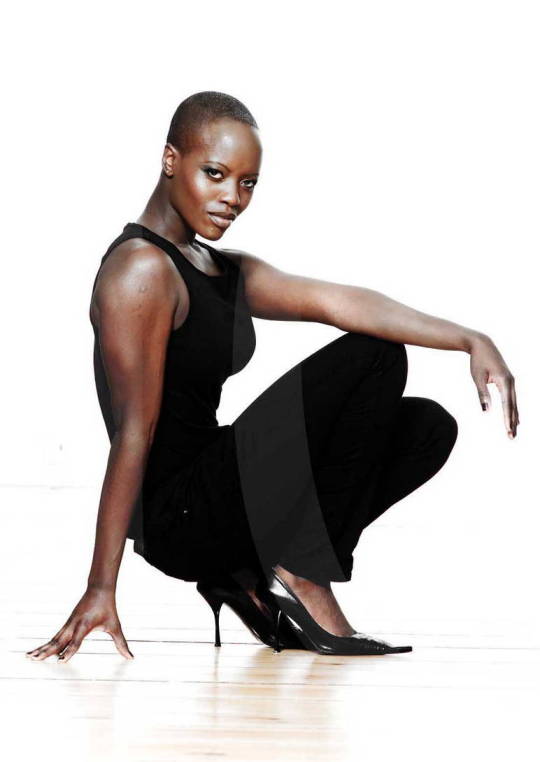 –
–
–
I totally did not notice this until it was pointed out to me. This is what I mean by different marginalized groups speaking up for their own needs. They can’t rely on other people to see what it is that’s bothering them. I knew about appropriation, just not from this particular angle. : 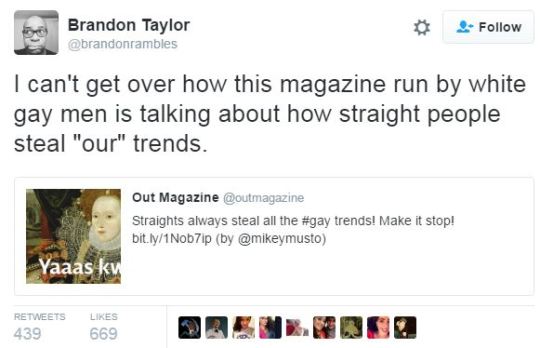 Black Men Enlighten “Out” Magazine on The Origins of Gay Slang

Let’s be honest – gay media lacks representation of people of color. Not only that, they don’t want to acknowledge the origins of mainstream gay trends. On May 9, Out magazine published an article about how straight people steal slang and other trends from gay people, but did not bother to educate themselves on the true origins of those trends first. Needless to say the article sparked some outrage on the Internet. Hopefully that’ll teach Out a lesson, because if you want to support minorities, you can’t just pick out one, you have to support them all!

Wanted to add another character to this

Lupita Nyong’o is in talks to play the love interest of Chadwick Boseman’s superhero in Marvel’s “TheBlack Panther,” sources confirmed to Variety.

“Creed” helmer Ryan Coogler is on board to direct the pic. Kevin Feige is producing the movie, which stars Boseman as T’Challa, the prince of the African nation of Wakanda, who must take over the mantel after his father’s murder. Marvel unveiled the character in “Captain America: Civil War” before the standalone film hits theaters on Feb. 16, 2018.

Nyong’o’s exact character is unknown at this time.

Joe Robert Cole is co-penning the script with Coogler.

The Oscar winner was most recently seen in “Star Wars: the Force Awakens,” where she voiced the character Maz Kanata, and also lent her voice to Disney’s “The Jungle Book.” She can be seen next in Disney’s “Queen of Katwe” opposite David Oyelowo and is also attached to star in DreamWorks’ “Intelligent Life.”

Marvel’s King of Wakanda, an African nation with strong roots to their ancient traditions mixed with the most cutting edge technology on Earth. T’Challa isn’t just the political ruler of his people, he’s their protector, a fierce warrior, and an Avenger. Not only that, he’s one of the richest and most intelligent people in the Marvel U on top of being a complete badass. Black Panther was the first black superhero published at Marvel and has a long comic history. Though he has only been in a few solo titles since his creation, serving mainly in team books, I’m going to give you a few places to jump into his story! And check out the rest of the BEGINNER’S GUIDE TO MARVEL COMICS series.

What you need to know: T’Challa earned his position as Black Panther, the political ruler of Wakanda through his skills as a warrior and his vast intellect. He has a PhD in physics from Oxford and is considered one of the eight greatest geniuses on Earth. He’s dedicated to his role as an Avenger, but has put the needs of his people before some of the more questionable activities the Avengers have supported. He was at one time married to Storm from the X-Men, though the marriage has since been annulled. At one time, he stepped down from his role of king to allow his younger sister Shuri to rule Wakanda as the Black Panther while he focused on the Avengers, but with her recent death, has stepped back into his leadership responsibilities.

Powers: The title of Black Panther is closely tied to both traditional magical and spiritual beliefs of the Wakandan people and high tech weaponry. When T’Challa became the Black Panther, he was allowed to eat the “heart shaped herb” which granted him enhanced speed, senses, strength, healing, agility, and endurance along with a connection to the Wakandan Panther God. He also has a connection to the dead, control over spirits, and the combined knowledge of all past Black Panthers. His weapons include a suit (and claws) made out of Vibranium, which is only found in Wakanda.

Black Panther vol 4 #1-41 (2005) – If you’re starting things around Civil War, this is a good point to pick up T’Challa’s solo title. This volume gives some backstory on Black Panther before picking up with his modern adventures and takes you up through Civil War and his relationship with Storm.

Black Panther vol 5 #1-12 (2008) – Set during Dark Reign, this story arc deals with T’Challa stepping down and his sister Shuri’s rise as the Black Panther.

Black Panther vol 6 #1-2 (2016-Current) – A brand new series that picks up after Shuri’s death in Secret War where T’Challa has to return to the throne of Wakanda. This is an ongoing series, so PLEASE BUY to keep it being published.

The New Avengers vol 3 #1-33 (2013) – This team is made up of the elite, the most powerful, richest, brightest superheroes who have to make some truly awful and morally ambiguous secret decisions to save the universe.

Avengers vs X-Men (Event) #0-12 (2012) – Black Panther features prominently in this event which pits him in his role as an Avenger against his X-Man wife Storm and results in the end of their marriage.

Secret Wars (Event) #1-8 (2015) – T’Challa has another major role in Secret War in his fight against Dr. Doom to restore order to the fractured multiverse. Sophie Okonedo in The Hollow Crown 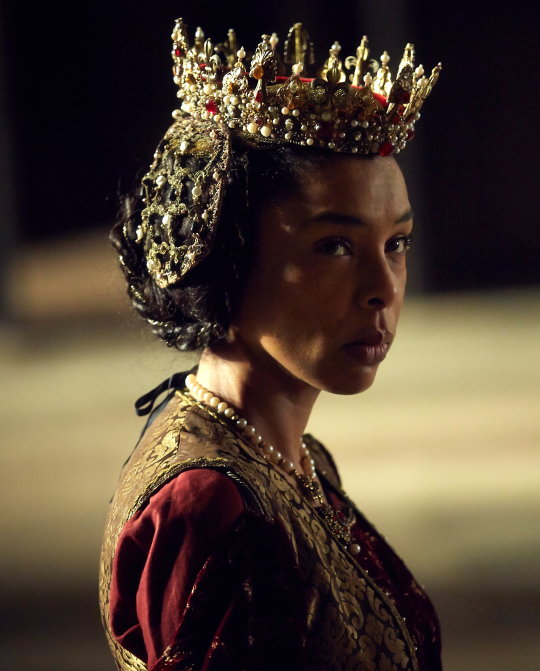 One thought on “Random Tumblr Talk”